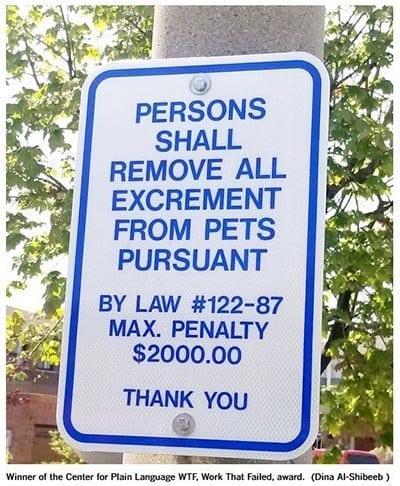 Found in today’s Los Angeles Times. Who knew? Certainly not I. Apparently there is something called the Plain Writing Act and it requires government agencies to assure government-bureaucrat-ese is converted into a form understandable by mere mortals.

The campaign for speech clarity dates from the Clinton administration and the cause of plain speech in government was taken up by then-Vice President Al Gore. Gore would show up at various agencies to bestow an award for the most improved writing.

Then in 2010, it was given the force of law. Progress has been made, according to The Times. But, as you can see in the sign above, an ongoing effort is required. That sign won the group’s annual WTF Award — Work That Failed.

Check out the article on the Center for Plain Language here.