Looking for a screenwriter to hire?
This screenplay ghostwriter is available now!

If you’re seeking an award-winning screenwriter for hire to tackle your movie or TV idea and get it whipped into shape for presentation to film executives, I’m your man. What follows is an essay on the subject of screenwriting, its components, and what you ought to look for when considering hiring a screenplay ghostwriter. If you’re new to movie and television writing, you’ll probably find it informative. Shall we begin?

People ask me all the time: What’s most important in screenwriting? Who knows what’s MOST important? One thing I know that is important is the construction of the scene. The scene is the basic building block of a screenplay; and, one of the most important parts of constructing a scene is its formatting.

Here’s a sample scene from one of my screenplays. In it I used industry accepted formatting. I formatted the scene this way because it conveys key information about the scene to a reader in a way that the reader expects.

All screenplay contests and all producers, studios, agents, and managers use professional readers who expect to see certain elements (chunks of information) presented in a standardized, familiar way.The chunks are written in the same way time progresses on the pages, from the top down, from earlier to later, from beginning to end.

Readers evaluate screenplays in terms of their potential for production. Often, they also estimate the budget for the film from the screenplay. So, if you want to see your screenplay made into a movie, you had better give readers the information they need where and how they expect it. In other words, you’d better use correct formatting.

The first line of a scene is called a SLUGLINE. In the example above, the slugline is:

It contains information about the location of the scene: inside on a stage, abbreviated INT for INTernal, or outside on location, abbreviated EXT for EXTernal.

The stage or location is then briefly described within the context of the film. In the example above, it is ERNIE’S ROOM dressed in a style appropriate for the year 1979 by the “set dresser/decorator” on the crew.

The set dresser/decorator places furniture and props in appropriate places. If the stage or location is to be dressed in a contemporary style, there is no need to specify a date year, unless it is to be contrasted with a style that is of a later or earlier date in another scene, at which time date years would be stated for both.

It also contains information as to the time of day, DAY or NIGHT, which is needed so the “gaffer” (chief lighting technician on a film crew) can properly light the set.

The next chunk(s) of information are usually ACTION LINES. They describe what action is happening in the scene, in the order that it is happening. In the example above, the next two lines are action lines. They are performed by the actor playing the character Ernie.

In these lines, Ernie first searches through his treasure box; then, he pulls out the photograph he was searching for. Notice that these action lines are very visual and also describe the objects that the character manipulates.

Next, in the example the actor playing the CHARACTER Ernie speaks.

After the setting, action, and dialogue are presented in the scene, more action, characters and their dialogue appear until the end of the scene. 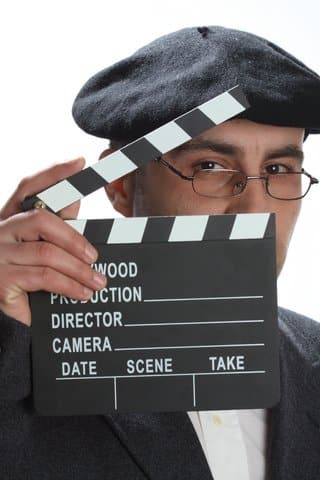 The story arc & the scene

The end of the scene occurs when a chunk of a “story arc” –- a scene -– is complete. In other words, the scene, like the story arc, has a beginning, middle, and an end.

Scenes are individual events, or steps, in the collective overall change of a life or lives.

In the story arc of which the above scene is but one step, Ernie changes from an old soldier who can’t forgive himself for the deaths of war buddies he’s caused to someone who is at peace with his life.

He changes by realizing the love he’s received over his lifetime has been enough to see himself as a person worthy of forgiveness.

He’s forced to recognize this love as he explains his life to his nephew, Frank, and his nephew’s estranged wife, Patty, who interview him as part of an oral history project.

In the scene before the one in the example, Frank and Patty have led Ernie to tell them about the women he’s loved. So, in this scene, he shows them an old photo of Stella, his greatest love in the latter part of his life. As he shows them the photo, they all realize how valuable and unselfish love is. They see parts of themselves in this little memory that is the scene. Ernie starts to embrace the love he’s had. Frank and Patty begin to see their own relationship in a more favorable light. The scene has done its work for all concerned. This learning is then reinforced in scenes following this one.

There are many other nuances of formatting that can appear in the scenes of a screenplay, too many to list here. The ones in the example above are the most basic.

To write your screenplay, it’s important you find the right screenwriter who knows the basics AND the nuances. The screenwriter should:

I’ve been a professional screenwriter for over 20 years and a WGA member for over 10, all the while writing dozens of screenplays and teleplays for myself and film production companies. I’ve specialized in writing screenplays that make an emotional impact on readers and viewers and have won more that 35 awards to prove it. I know how to make people laugh, cry, and shiver in fear.

If you have a screenplay that you’d like written, let’s talk. I’m Chuck Loch, a screenplay specialist for Ghostwriters Central. I make my dreams come true by making yours come true first. Click here for our screenwriting rates.