What to look for in a military memoir writer:
Info for US Army, Navy, Marines, Air Force, Coast Guard & Space Force veterans.

My third day in Hollywood, I cold-called the production offices of A Few Good Men, spoke briefly to First Assistant Director Frank Capra III, and he asked me to come in for a meeting. Two days later, the guard at the Sony lot saluted me as I arrived. Later, as I sat with Mr. Capra and producer Steve Nicolaides, Rob Reiner walked in, got interested in our discussion, and stuck around. I was there for 20 minutes, and four weeks later they called back to offer me a job. 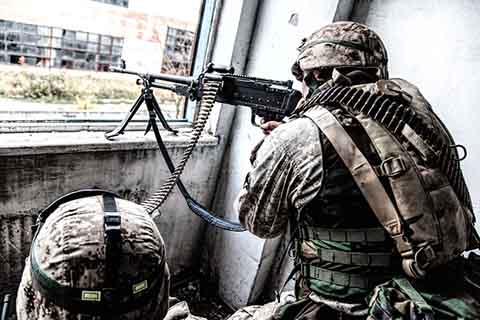 turnip truck that week? I was an Army Reserve officer… who decided to try his luck calling every movie company doing a military project to offer my services as a consultant. (And showing up wearing dress greens, which caused the surprised guard to pop to attention.)

Sure, A Few Good Men was Navy and Marines, but having read the script, I explained to the brass how I would train their main, supporting, and background cast to convincingly move and sound like military professionals. It’s not just a costume, I told Mr. Reiner, America’s favorite TV hippie. It’s a culture and an institution. Built on tradition, sustained by practice, lived daily.

Having accepted a position at Warner Bros., I had to pass on A Few Good Men, nor did I ever wear my uniform again. On moving from Rochester, NY, to Los Angeles, the Army reclassified me IRR, i.e., I could be reassigned to a local unit, but never was. And I hadn’t really much of a career before. Attending Syracuse University on an ROTC scholarship, I’d spent a year as a civil affairs officer, graduating Airborne School and Adjutant General OBC along the way. Having soaked up military history all my life though, I still felt like a soldier who dabbled in film, not the creative advisor, screenwriter, and author with a military background I eventually became.

When they never served

You don’t really think about how well you know the military…until you get involved in a war project with creative people who’ve never served. In my experience, no non-veterans tried to fake military expertise; their story instincts are based on what they saw in Apocalypse Now or The Great Escape, and every instance where I offered my two cents was well-received. Storytellers appreciate authenticity, and telling details, and they’re kind of on their own: even if Tom Clancy wrote your story, you can’t just ring him up to clarify a scene or answer questions.

My background served me well on a number of projects. I put military dialogue in the mouth of Nicholas II in Rasputin, helped cut the Battle of Pharsalus in the Julius Csesar editing room, and was hired to write screenplays based on the biographies of Hitler coup plotters Claus von Staufenberg and Admiral Canaris, as well as the adventures of American physician George Hatem in WW II China. My finest achievement remains my unpublished novel based on the Iraq War experiences of an old Army buddy. It was recently named a runner-up in the James Jones First Novel Contest, and an excerpt became my first published fiction.

If you’re a war veteran thinking of hiring a ghostwriter for your memoir or screenplay, you obviously have more military experience than I do. And there are so many programs now that encourage veterans to write about their experiences, both as a record or testament to be shared with loved ones or the community, as well as a tool for emotional healing in dealing with PTSD. You may have already spent time chronicling your experiences, and if you applied yourself diligently to the craft, your prose may be well-written. Having worked with the veterans’ writing program Returning Soldiers Speak though, your work may still need improvement in two areas:

It may be difficult for non-military readers to understand.

Kept at a distance

As I first discussed with A Few Good Men, the American military is purposely kept at a geographic and cultural remove from mainstream society, a divide that has slowly, steadily increased in the decades since the repeal of the draft. To truly, accurately relate a military story to a non-military audience in the 2020s requires what I’d go so far as to call a translation, i.e., a writer with the sensibility to not only know which details need to be explained, but how to express such explanations with language that doesn’t seem pandering or tutorial. Audiences do not want a lecture, or lengthy digressions. They want to get your point, quickly, and move on.

In some ways, filmmaking is a great training ground to become this kind of translator. Nobody watches a war movie hoping for long monologues about What’s Happening and Why. They’ll sit through a scene or two of officers pointing at maps, but otherwise expect to understand the action through well-paced visual sequences. A great movie, like Black Hawk Down, always keeps the audience in the loop. They come away feeling like they know something not just about combat, but what it means to work in a military structure, plus day-to-day life in that culture. That’s what I always endeavor to capture in my war stories, whether it’s the Battle of New Orleans, the Foreign Legion in Vietnam, or the counterinsurgency in Baghdad’s Sadr City.

Well, it may be accurate to a t, and eloquently cast into words, but is it entertaining?

“Entertaining?!” I’m trying to tell people what the hell I went through, not amuse them!

And I’m totally with you on that, but there’s one hideous, unspoken truth about memoir: Outside of your closest friends and family, nobody cares what you went through.

Getting them to pay attention

Don’t worry, it’s not just you. It’s incredibly difficult to get anyone to pay attention to anything.

And a story requires the reader or audience to not only get interested, but stay interested. It’s like a magic trick, except it goes on and on, minute by minute, page by page, with the storyteller both holding the audience’s attention in any given moment, and stoking their desire to see what comes next. In other words: entertaining. Some people like to be entertained, some people need to be entertained, and some are willing to commit their time and plunk down coin for a worthy tale.

Those are the people we need to entice, and if you have a story to tell, I’m the guy who can take autobiography or reportage and make it entertaining.

My ability to hold an audience began long before I ever set pen to paper. As a teenage actor in regional and school productions, you learn pretty quickly what keeps butts in seats, and eyes on you. The stakes only go up when you start performing your own material or making amateur films and there’s no classic Neil Simon script to carry you. And I continue to write, to study, and to perform, decade after decade, forever honing my instincts to both identify compelling stories, and tell them by maximizing whatever drama, comedy, and emotional pull I can find.

What I bring to your project is the ability to detect or undercover aspects you may not have noticed or fully considered. I’m not going to change any facts. I’m looking for story threads, characters, and relationships I know will resonate with readers who’ve never even heard of you.

No, I can’t guarantee my telling your story will result in a blockbuster success, but I promise to apply all my knowledge and ability to make it as accessible, engaging, and yes, entertaining, to as wide an audience as possible.

Of course, the only remaining question is, can you handle the truth?