You, too, can be a military writer or novelist.
But make that military fiction tale accurate.

“The destroyer’s bow plunged down into the trough then stabbed through the heart of the next monstrous wave. John stood by the anchor windlass, arms reaching for the sky and rejoicing in the water cascading around his feet.”

But there’s something wrong. Let me see…I can’t quite put my finger on it…. 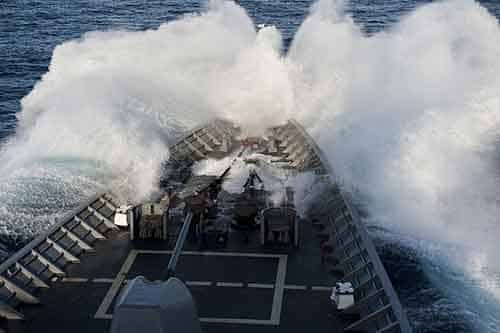 John’s an idiot! He can’t possibly be so stupid as to be standing up near the anchor windlass in heavy seas when there’s green water shipping over the bow. He’d be washed overboard in a heartbeat, body broken from being pounded against fittings on the foc’sle and the lifeline stanchions as it went over the side.

That scene was exciting, sure. But it was wrong. Admittedly, a landlubber might — might — read it and not notice, or not care. But anyone who’s served in the Navy, Coast Guard, or as a civilian mariner? Nope! They’re going to notice it. They may not be bothered by a couple of errors like that, but more than a few and they’re likely to put the book down. I would, and I have. So have many of my friends from my days in the surface Navy. I also have friends in the Army, Air Force, Marines, Coast Guard, and the various National Guard components. The majority of them feel the same way. They won’t read something if it makes them wag their head and say “that’s BS.”

You have to fix “that’s BS”

What to do? You’re a military writer, you’ve got a story that is just bursting to be told. You know there’s an audience: Tom Clancy fans. It’s about this guy and this gal….

Tom Clancy never served in the Navy. But he got things right, very right. And he wasn’t the first. Despite his fame, he joined a long line of military fiction writers, from Frederick Marryat (1792-1848) to today’s spinners of military yarns. He just exploded the market. Most, for example, George Galdorisi who writes today, have served, so they’re able to turn their experience and ability to tell stories into fantastic fiction that’s frighteningly plausible. So how did Tom Clancy do it? He did his research. He talked to people who had or were serving. And he read. He read brochures and magazine articles on weapons and sensors, on ships and submarines and aircraft. He joined the US Naval Institute and read non-fiction about tactics and maritime strategy and the Soviet threat. That’s often what non-veteran writers do. Even those of us who’ve served are very careful when straying outside of our experience. I don’t write about land war without my Army infantry friends reviewing it and approving. If they say it’s not accurate, I get their input to fix it.

But your story is right there, it needs to be told now, possibly before it becomes an historical event — you’re certain it could happen tomorrow. You don’t have time to spend a few years doing that level of research. And it’s going to be hugely successful, too! So, what do you do?

Here’s one option. Work with a ghostwriter, one who’s a military novelist.

Get input or writing help from qualified military fiction writers

Find one here at Ghostwriters Central, someone who has that military background and can help you make it right.

A ghostwriter will work with you at whatever level you want and need. You’ve got your manuscript all finished? We can read it and recommend changes that will keep your readers turning the pages, instead of putting it down halfway through the third chapter, then not even donating it to the library. You’ve got a story idea, but don’t know how to put it into words? No problem there, either. A ghostwriter can take your idea and work with you to put it on paper (figuratively, of course) in your voice. Anywhere in between those two extremes, there’s a ghostwriter who can help you out. The end result is your story, told your way, in your voice, accurately, in an exciting manner that will engage readers. And remember that your ghostwriter partner has experience writing fiction. They know the tradecraft, how to keep the tension just below the boiling point; the best ways to surprise readers with twists and unexpected turns; and when to ease off on the tension so the reader can breathe. Did I say partner? Yes, because that’s what we are. We’re a silent partner who makes sure your story has the potential to be a success, but who doesn’t share the limelight or take credit. It is, after all, your story.

But let’s say you don’t have a fictional story. It’s from real life, your life!

Great! A ghostwriting partner can help there, too. Again, it doesn’t really matter where you are in your journey to publication. Can’t write a lick? No problem, there’s a ghostwriter for that. Got the manuscript completed but your exciting life stories just don’t jump off the page like they ought to? Again, a ghostwriter can help you make it keep the reader on the edge of their seat.

Veterans make up a large part of the audience for military books. Most of the rest of the audience is made up of savvy readers who have, through their own efforts, accumulated knowledge of how things work in the military. And they, as a whole, are not tolerant of inaccurate portrayals of events or people. Even things like getting the uniform wrong will bug them. Weapons that don’t exist, but could, are great. Weapons that are straight out of science fiction about the 24th century aren’t. Flying submarines are entertaining in James Bond novels. Not so much in military fiction.

The writers at Ghostwriters Central are experienced and they’ve been honing their craft for years. For example, I’ve been writing since 1990, though there have been a few hiatuses mostly during deployments! I’ve got 32 years Naval service under my belt as a Surface Warfare Officer. I’ve served in Navy and Joint billets. I’ve completed two novels, and a half-dozen short stories. I was a “technical advisor” for a good friend as he worked on his last two novels about a Naval officer, set during an alternate history of the Civil War. He had me assist him with all the maritime details. Having served in Army intelligence during Vietnam, he knew he didn’t know squat about sailing or early steam ships, or the sea. We fought endlessly about drama versus accuracy, and as he would have told you before he passed away, sometimes I won. But he knew he needed help.

If you don’t have first-hand knowledge, get help

You may not need a lot of help. But you won’t know unless you ask, and Ghostwriters Central has the folks who speak Navy, Army, Air Force, Marine, Space Force, Coast Guard, or Joint (yes, there’s that other language, Purple!). They can identify what you need help with, and then give it to you.

Ghostwriters Central is here to help.