Have you tried writing an email, letter, speech, or story, and although you’ve spent countless hours, days, even weeks working on it, you’re still not satisfied? Is your dream writing project becoming a nightmare of never ending manuscript editing and revisions that lead you to the same place: It’s not good enough!?

What about hiring a professional writer to finish the job? The thought hadn’t crossed your mind? Really? OK, consider this example:

After barely getting any sleep, Lisa is up at 7:00am. Her race is at 10am. She meets with Coach Mike, who orders her to stretch and to get a massage. Judy, the team trainer, meticulously helps Lisa to perform a series of stretches. Lisa’s muscles are very tense, even after Judy 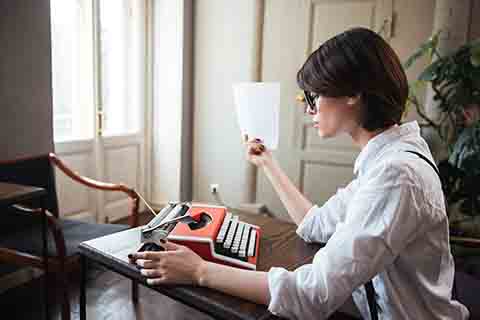 gives her a massage, who gave special attention to her calves which have been sore for the past week.

It’s 10:am, race time. So all the years of sacrifice and hard work come down to one moment: The California State 100M final. Lisa was so nervous. This was her chance to redeem herself after finishing dead last the year before and not even making the final the previous year. All she could hear was her beating in her chest as she waited for the starter’s gun.

BANG!!! The gun goes off and immediately Lisa explodes out of the blocks. Nerves have been replaced by instinct and she accelerates with every stride. She can feel the heat of her competitors on either side. They are there to win, but this time she doesn’t fold under the pressure. Instead, she relaxes and pushes forward. She goes faster and faster. She can now hear the crowd roar as she approaches the finish line.

Yes! She did it! She not only won the race, she set a new personal best and dominated the rest of the field. The announcer states what everybody has already seen: Lisa Harris has won the women’s 100M. The crowd cheers. Her family cannot contain their joy. Her father screams: “Lisa you won baby, you won!” Her mother cries uncontrollably, as she  knows too well all her daughter went through to achieve this awesome feat: 100M State Champion. Lisa hugs her parents as she proudly celebrates her victory.

Here’s what a professional can do with the same story:

BOOM! The starter’s gun goes off and Lisa explodes out of her blocks. It’s the California State Championship finals; Lisa has eleven seconds to redeem herself, or add another chapter of disappointment to a young career plagued by injuries. After 20 meters, she leads the field, but there’s still a long way to go. Will she hold on?

Lisa barely got any sleep the night before. Coach Mike called her at 7am, ordering her to stretch and to get a massage from the team trainer, Judy. After the massage, Lisa felt more relaxed. Her calves were still a bit sore, but she only had 1 race left. The 100-meter final was scheduled to start at 10am. Lisa was ready.

Now at 50 meters, other competitors have drawn even; the race is on! “Come on Lisa!” After running in focused deafness for the first 60 meters, Lisa can finally hear her mom screaming. And she responds. Instead of tightening up, Lisa relaxes, remembering what Coach Mike constantly preaches: “When the race gets close, don’t panic, focus on your technique!”

Lisa had always had tremendous potential. Coach Mike realized this from the first time he saw her sprinting. But Lisa needed to work hard if she was ever going to be a champion. Coach Mike was the drill sergeant, Lisa was his best recruit, and the 100-meter was their battlefield.

At 80 meters, Lisa opens a sizable lead on the rest of the field. Two seconds later, she crosses the finish line in first place! The announcer makes it official:“Crenshaw High’s Lisa Harris has won the girl’s 100-meter final!” Lisa’s father shouts: “Lisa you won, baby, you won!” His wife cries uncontrollably as Lisa runs into her arms; they jump up and down, celebrating this awesome feat: California State 100-Meter Champion!

Both examples are 300 words, but the difference in quality is clear: The professional writer’s version is simply better. This is what’s known as rewriting, and it’s one of the most underappreciated aspects of great writing. You’d be surprised what the “final” draft of your favorite book, screenplay, or speech looked like before it had been rewritten.

If you’re not an experienced writer and you’re thinking: No, I want to do this by myself; this is my project! Please stop. If a professional rewrites your work, he/she would be taking your draft, and turning it into something far more engaging than you ever could alone. And it would still be your project. Remember, you’re the one paying for it!

Look back at the examples. They’re telling the same story: same characters, plot, and outcome. All the professional writer did was build on the initial story. Of course, you do have cases where a rewrite is a total departure from the original piece. But that’s up to you. A professional writer would be bound by your instructions. It’s about your vision, and bringing your dream to fruition.

Just like Lisa in that story, you need help if you’re going to win this race! Yes, it’s a real competition: If your writing can’t hold people’s attention, you lose.

So don’t feel ashamed or guilty about hiring a professional writer to edit or rewrite the manuscript that you’ve poured your heart into. Quit wasting time and get one ASAP! You might be thinking: Where can I find the right professional to rewrite my work? If you’re reading this, then you’re at the right place. Just contact us and tell us what you need.