“So many screenwriters refuse to compromise their creativity or their vision. But what they do not understand is that writing specifically for lower budgets actually sharpens their storytelling skills.”

The average budget for a Hollywood movie is well over $80 million. But if you’re waiting for a producer with Scrooge McDuck-sized jack to come along and finance your film, you’re begging. A bigshot producer that doesn’t personally know you is not going to trust you to write an $80 million movie even if you’ve been writing for years and your script is great. People with a big bankroll work with people they already know because they need to be certain the script will be delivered on time and exactly what they need to succeed. There’s just too much money at stake and the risk is too high to do otherwise. This means, like it or not, if you plan on writing a script and having it produced there’s a good chance you are going to be writing it for a low-budget production.

I have never met a producer that’s shooting a story. They all shoot “budgets” and the lower the budget the better. So, the trick becomes: How do you tell a compelling story and keep the costs down?

William Martell is a genius screenwriter that specializes in low-budget scripts. He describes writing low-budget screenplays similar to juggling chainsaws — and not the bloody kind in horror movies. Plot, character, theme, setting, action, dialogue, POV — each of these elements is a metaphorical chainsaw you must keep in play. Then a producer tosses in one final chainsaw called money. Then you must juggle that as well.

Secret No. 1: One location


Standard indie-style scripts traditionally break down into 9, 12, 18, and 24 day shoots. There’s a good reason for this but that’s a discussion for another time. Just know this – you must write your script so it can be filmed in one location. Not one city or one giant building or one outdoor venue; I’m talking one, small, easy to get, contained, central location. And you might want to make it interior, so weather and lighting is not an issue. This way the cast and crew can set things up one time, shoot the script with the enthusiasm of mutant gerbils on shore leave, and actually get it done. But this strategy comes with one daunting problem… 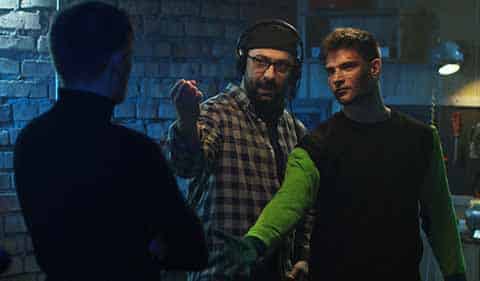 Single location scripts eat ideas – they devour them so you must bring your A-game. This is full-contact ninja-style screenwriting gone gonzo as you launch your pixel-apocalypse-upon-the-world type of screenwriting. And the story concept must be linked to that location and be freakishly cool for it to make any sense at all. And you must work that single location like your life depends on it. But how?

Hardly a secret, right? Everybody has heard of high-concept. It is a one sentence description of your story, and it must contain the hero, villain, conflict and goal, and be universal and unique all at the same time. Low-budget films absolutely depend on great story concepts. But the titles should also be high-concept. Check it out…Snakes on a Plane. Hobo with a Shotgun. Dead Hooker in a Trunk. All these titles convey the story in a clear fashion even before we get to the actual story.


Two characters = awesome. Three = great. Four-five-six = good. Any more actors than that and you risk breaking the bank. But how do you sustain the interest of a reader (or viewer) with just a few people in one spot?

Most popular films work well with mildly interesting and quirky characters because the budget will support other elements that sustain viewer interest (like a star). But we don’t have that advantage. In the low-budget world, the characters, especially the lead, must be crazy good. I have a huge checklist of things I go through when I create characters to ensure, they’re up to the task. So, believe it or not, writing low-budget scripts actually forces you to become a better writer.


This technique is not a fad or a cliché. Found-footage is actually a genre like drama or comedy or horror. So you might consider finding a good reason to give the characters in your script camcorders then embed that idea into the storyline. Found-footage is cheap. It works. And if the producer or director doesn’t like it you can always take it out later. My advice? Write a script with found-footage as an integrated part of the plotline because these scripts are their own legit genre.


As advanced and widely used as special effects and computer-generated images are they still cost money. And money is scarce if you’re shooting a low-budget movie. Now I know a lot of popular films are CGI-driven spectacles and as a screenwriter you’re constantly hounded to “show don’t tell” — and I also know many great horror and sci-fi flicks are crazy cool because of their CGI, but that’s not what we’re doing here. If you can’t shoot your script in the real physical world with a bunch of your friends running the cameras, then don’t write it.

So, what do you do if you have an evil being from another realm that haunts your lead character? Have that demon inhabit a human body to do their dirty work. It’s simple. It’s cheap. It’s an actor saying lines.


If somebody likes your script and wants you to change it — do it. Film is a collaborative medium. And if that makes you queasy then pull your pants up because a producer already had them down to your ankles and you didn’t realize it.

Professor Richard Walter, screenwriting chairman at UCLA, has the best approach for handling changes during the rewriting process. It’s his “yes, but” approach.

If a producer wants your female lead character to be a cop instead of a pet store manager you tell them “yes, but” we’ll lose all the action with the Hi-Lo in the stockroom and that’s where she meets her love interest. Do you wanna lose that, too? And that Hi-Lo is already on the set and it’s free and they use it to escape. Do you want an expensive car chase outside instead?

In my experience, if you wave the higher-budget flag, a producer will surrender, but if they can’t see your point, then make the changes they want. Never argue — it will only make things worse.


It’s all so easy when you first start writing screenplays. You write script number one on the guts and glory of your life, the people, and places you know, vibrant, palpable, and the feeling is electric! You mine the crazy scene makers, shape shifters and carnival barkers in your life. Then, if things go good, you get confronted with the business end, art meets commerce, and you have to fit your story into a budget and other people’s expectations. But you must always write with one thing…passion.

The passion your lead character has is to pursue something they desperately want more than anything and your personal passion as a writer to tell their story. Nothing else can replace this. No seminar or book will do. So, write a screenplay that will knock everybody’s socks off and right into the dryer because that’s what people want. Scripts full of great characters with passion.

About Ghostwriters Central, by Michael McKown


We have many fine screenwriters on staff. Just scroll down and check out the gallery of writers. We would be delighted to prepare your story for the cameras. All you have to do is call, text or email. If you’re ready to start, we can get you across the finish line.