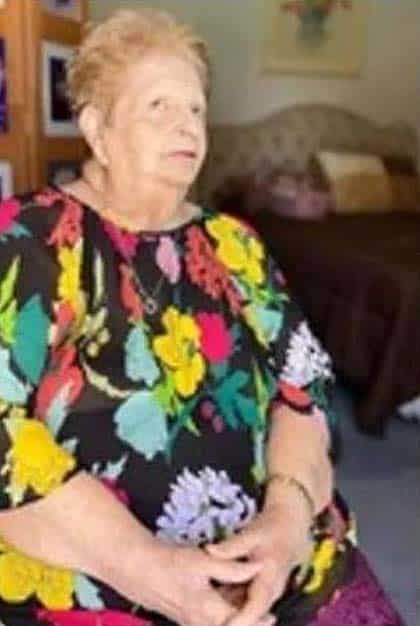 Folks, if you’re a fan of this blog, then you know how much I love great writing. Well, this is the ultimate obituary, lifted with respect from the Fayetteville Observer newspaper, authored by her son:

Of itself hardly news, or good news if you’re the type that subscribes to the notion that anybody not named you dying in El Paso, Texas is good news. In which case have I got news for you: the bawdy, fertile, redheaded matriarch of a sprawling Jewish-Mexican-Redneck American family has kicked it. This was not good news to Renay Mandel Corren’s many surviving children, grandchildren and great-grandchildren, many of whom she even knew and, in her own way, loved. There will be much mourning in the many glamorous locales she went bankrupt in: McKeesport, PA, Renay’s birthplace and where she first fell in love with ham, and atheism; Fayetteville and Kill Devil Hills, NC, where Renay’s dreams, credit rating and marriage are all buried; and of course Miami, FL, where Renay’s parents, uncles, aunts, and eternal hopes of all Miami Dolphins fans everywhere, are all buried pretty deep. Renay was preceded in death by Don Shula.

Because she was my mother, the death of zaftig good-time gal Renay Corren at the impossible old age of 84 is newsworthy to me, and I treat it with the same respect and reverence she had for, well, nothing. A more disrespectful, trash-reading, talking and watching woman in NC, FL or TX was not to be found. Hers was an itinerant, much-lived life, a Yankee Florida liberal Jewish Tough Gal who bowled ’em in Japan, rolled ’em in North Carolina and was a singularly unique parent. Often frustrated by the stifling, conservative culture of the South, Renay turned her voracious mind to the home front, becoming a model stay at home parent, a supermom, really, just the perfect PTA lady, volunteer, amateur baker and-AHHAHAA HA! HA! HA! Just kidding, y’all! Renay – Rosie to her friends, and this was a broad who never met a stranger – worked double shifts with Doreen, ate a ton of carbs with Bernie, and could occasionally be stirred to stew some stuffed cabbage for the kids.

She played cards like a shark, bowled and played cribbage like a pro, and laughed with the boys until the wee hours, long after the last pin dropped. At one point in the 1980’s, Renay was the 11th or 12th-ranked woman in cribbage in America, and while that could be a lie, it sounds great in print. She also told us she came up with the name for Sunoco, and I choose to believe this, too. Yes, Renay lied a lot. But on the plus side, Renay didn’t cook, she didn’t clean, and she was lousy with money, too. Here’s what Renay was great at: dyeing her red roots, weekly manicures, dirty jokes, pier fishing, rolling joints and buying dirty magazines. She said she read them for the articles, but filthy free speech was really Renay’s thing. Hers was a bawdy, rowdy life lived large, broke and loud.

We thought Renay could not be killed. God knows, people tried. A lot. Renay has been toying with death for a decades, but always beating it and running off in her silver Chevy Nova. Covid couldn’t kill Renay. Neither could pneumonia twice, infections, blood clots, bad feet, breast cancer twice, two mastectomies, two recessions, multiple bankruptcies, marriage to a philandering Sergeant Major, divorce in the 70’s, six kids, one cesarean, a few abortions from the Quietly Famous Abortionist of Spring Lake, NC or an affair with Larry King in the 60’s. Renay was preceded in death by her ex-boyfriend, Larry King. Renay was also sadly preceded in death by her beloved daughter, Cathy Sue Corren Lester Trammel Webster, of Kill Devil Hills, NC, who herself was preceded in death by two marriages, a fudge shop and one eyeball lost in a near-fatal Pepsi bottle incident that will absolutely be explored in future obituaries. Losing her 1-eyed badass b**** of a daughter in 2007 devastated Renay, but it also made her quite homeless, since Cathy pretty much picked up the tab.

A talented and gregarious grifter, Renay M. Corren eked out her final years of luxury (she literally retired at 62) under the care, compassion, checking accounts and, evidently, unlimited patience of her favorite son and daughter-in-law, Michael and Lourdes Corren, of world-famous cow sanctuary El Paso, TX. Renay is also survived by her son Jeffrey Corren and his endlessly tolerant wife Shirley, of Powell’s Point, NC; Scott Corren, and what’s left of his colon, of Hampton, VA; Marc and Laura Corren, the loveliest dirt farmers of Vernon, TX (seriously, where is that); and her favorite son, the gay one who writes catty obituaries in his spare time, Andy Corren, of – obviously – New York City. Plus two beloved granddogs, Mia and Hudson. Renay was particularly close to and grateful for the lavish attentions of her grandaughter Perla and her great-grandchildren Elijah and Leroy, as well as her constant cruise companions Sam Trammell of Greenville, NC, and Adam Corren of El Paso, TX. Renay took tremendous pride in making 1 gay son and 2 gay grandchildren, Sam Trammell and Adam Corren.

There will be a very disrespectful and totally non-denominational memorial on May 10, 2022, most likely at a bowling alley in Fayetteville, NC. The family requests absolutely zero privacy or propriety, none what so ever, and in fact encourages you to spend some government money today on a 1-armed bandit, at the blackjack table or on a cheap cruise to find our inheritance. She spent it all, folks. She left me nothing but these lousy memories. Which I, and my family of 5 brothers and my sister-in-laws, nephews, friends, nieces, neighbors, ex-boyfriends, Larry King’s children, who I guess I might be one of, the total strangers who all, to a person, loved and will cherish her. Forever. Please think of the brightly-frocked, frivolous, funny and smart Jewish redhead who is about to grift you, tell you a filthy joke, and for Larry King’s sake: LAUGH. Bye, Mommy. We loved you to bits.