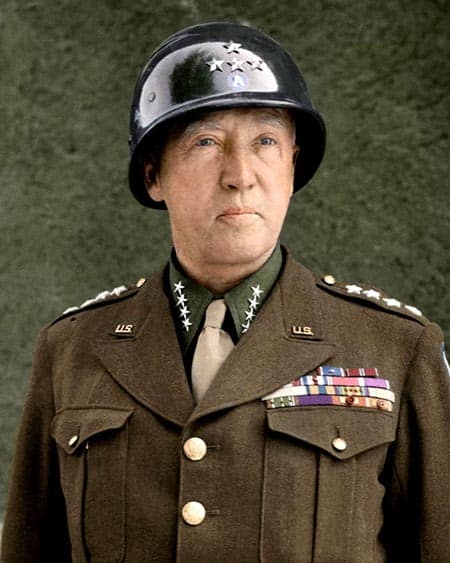 For years, (Patton’s daughters) had been made to memorize a poem each week — Patton called it a “brain exercise” — and this new effort proved relatively simple. Later he paid them 10 cents a page to read items of his choosing, such as Plutarch’s Lives. Ruth Ellen also memorized one of her father’s poems about reincarnation, in which he recalled the sights, sound, and smells of death during the Crusades:

I am no callow Christian,
No pus-paunched prelate, I,
I hope not for salvation,
Nor fear the day I’ll die

In wantonness of appetite,
In women, wine and war,
In fire and blood and rapine
In these my pleasures are.

I love the smell of horse dung,
The sight of corpse-strewn mud,
The sound of steel on armour,
The feel of clotting blood.

The women I have ravished,
The infants I have slain,
The priests and nuns I’ve roasted,
They haunt me not again.

Priests talk of soul’s salvation,
And shining lights afar,
But give me a harlot’s laughter,
And the battle-flash of war.

Priests talk of soul’s damnation,
The white hot pits of hell;
I fear more wounds that fester
And gape and rot and smell

Then here’s to blood and blasphemy!
And here’s to whores and drink!
In life you know you’re living
In death we only stink.

When Ruth recited the poem in school, her horrified teacher took her by the hand to the headmaster, who sent home a note. A distressed Beatrice explained to her husband that not all parents were so open with their children. Patton thought it hilarious.

(From Patton: A Genius for War, by Carlo D’Este).