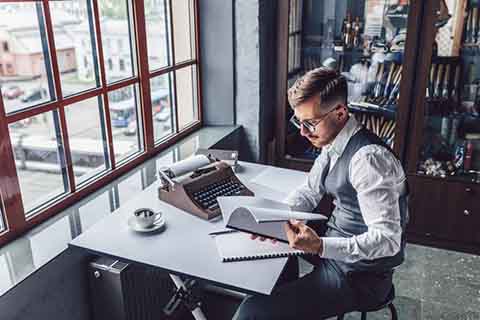 While I’m scrolling through this group, I often think about what a disservice is done to aspiring screenwriters by the contest promoters, the list makers, the coverage providers, the YouTube channels, the pitch fests, the software companies, the logline critics, the pitch coaches, the Twitterverse, and so on — and so on.

The business of Hollywood is an excruciating blend of irrationality and non-transparency. The majority of those listed above are in this for the money — our money — which gets spent out of the mixture of fear and ambition that everyone carries with them when writing a script and attempting to bring it to an audience.

It’s an illusion of certainty

These organizations and entities aren’t invested in helping writers succeed — they are in it to sell a dream of success, and more specifically, an illusion of certainty, to those who have a passion for the art and/or the trappings of success (I happen to think both are equally fine motivation) of making films and television shows. They leverage the irrationality and the non-transparency to get you to fork over money for what is often very little benefit and keeps you spinning over things that really don’t matter in the big picture, leading the fear to overwhelm the ambition and for us to spend more money. So, with that in mind, here are my answers to some questions and their natural derivatives that keep popping up in this group lately:

What software should I use?

Any and all that you feel are helpful and nothing more than that. The only thing you will need is a way to make sure that your script is in the proper page format, which in this case has more to do with the ease of tabbing to the appropriate indents than anything else. Final Draft is the industry standard and will make your life more convenient in terms of file sharing, but now that we’re in the age of Save As and PDFs, you can pretty much use anything that successfully does this. All the other software genres (story design, etc) if it helps, use it. If it doesn’t, don’t waste your time and money.

How important is format?

Will my script be tossed out if I use CUT TO: or my sluglines aren’t 100% up to the standard of (whatever book you think all producers use to judge and regulate this — even though there actually isn’t one)?

Format is just the outfit you wear to the interview. Plenty of us are proof that blue jeans and a personality win the day just as well as a business suit and rigid jargon. There are standards of formatting, but if your style is sensible, consistent and provides a clean read, no one cares — except for the people who would like you to pay for their services or publications. Do your thing and just make sure you aren’t wearing a clown suit.

But what about all the stories that terrify me about my script being thrown out for minor format errors?

A great story is much more important than immaculate formatting. You are permitted to have your own idiosyncrasies as long as they don’t confuse or diminish the read. I don’t know a serious producer or financier in the film industry who operates in this manner, and I also believe that anyone who will toss a script because they don’t like my title page or the fact I use CUT TO: (or other appropriate transitions) to break up acts and major sequences is a person I don’t want producing my work.

Having spent 20 years in the studio system I can tell you that no two working writers format exactly the same way. And the one thing they have in common: They’re all working. A lot of this mythology comes from the late 1980s to the early 2000s, when it was a seller’s market at maximum volume with ridiculous time pressures on decision making. The conditions at present are the complete opposite.

Will my script be a pass if I don’t have an inciting
incident on page 10 or the midpoint on page 60?

No one passes on a great story when the call to action happens on page 18 rather than page 10 any more than they say yes because it happened on page 3. You know what happens if you tell an excellent story and a serious person in the industry wishes the call to action came a little sooner? They pay you money to move it where they want it.

If you’re sweating this, you’re not writing the best story you can, you’re retrofitting a concept to a paradigm that has been sold to you. You’re far better off with the best story possible. If it conforms to Syd Field or Joseph Campbell or Blake Snyder or whatever the hell that person’s circle of something is, totally fine. All of them can be helpful in structural design and none of them are the same. In my opinion the better way to think about structure is “What are all the moments readers and audiences are going to need to see for them to really love this?” and then place them in the most strategic spot to make the narrative as effective as possible.

What do you think of this logline for a script I haven’t written?

I think it’s an exercise in futility and not what loglines are for. Loglines and premises are two different things. I don’t care who your screenwriting professor was, or what the big, furry guy with thick rimmed glasses on YouTube said to his 2,000 followers. A logline is the most efficient and effective distillation of your finished story. Trying to “work out your logline” before you’ve written your script is wasted time. You want to find a killer premise to launch from and not worry about the length or the “equation” of the sentence structure.

What screenplay contests should I enter?

Somewhere between none and “the ones you think you can actually win.” It’s a huge waste of money and causes all sort of angst when you feel like you got a lazy read, etc. But the truth is no one cares if you were a quarter or semi-finalist for anything. Rack up a bunch of wins and it might make a difference in your queries. Win the Nicholl and you’ll get meetings. Be a quarterfinalist in the Nicholl and…meh.

Who provides the best feedback?

Writers whose work you admire, as well as writers who have made deals more than once. If someone’s writing kicks your ass (and they don’t have to be a pro, can be anyone you’re in contact with), that’s who you want to hear from. The dismayed person who 20 years ago formed the writing group that’s your best option for an in-person meetup in your suburb who is strict about the “rules?” Probably not getting you closer to a draft that can be competitive in the marketplace. People who have sold one thing or made one deal (especially if much time has passed since then) can be dangerous because they are often convinced that whatever they did the first time works even though it never has again. In short, you want someone who you think is great to help make you greater and someone who has had repeated success to help you further develop and strategize.

What about coverage services?

They’re pretty useless. No one is interested in someone else’s coverage, particularly coverage you’ve paid for. I don’t know how many DMs I get along the lines of “Hey! I just got my first 7/10 from (whatever) service/contest/etc. Do you think I can get an agent now?!” No. It will have nothing to do with the representation you someday secure. It’s actually more likely to hurt you if you attempt to leverage it as some sort of validation. My hope is you’ve at least figured out how to write off all these costs on your taxes.

Here’s the main thing: These services are more about pointing out what’s “wrong,” rather than finding ways to make it more inspired and/or more sellable. For those who have used the same service on the same script more than once, my guess is they just managed to find more things “wrong,” and probably contradicted their previous coverage in some manner.

But what if someone has read a
thousand screenplays for different contests?

The only thing we actually know about contest readers is they’ll work for cheap. I have listened to thousands of songs. It makes me neither an ethnomusicologist nor Jimi Hendrix. Contest readers aren’t evaluating whether your script is sellable. They’re judging it on contest parameters that have very little to do with whether your script is sellable.

But what if they used to be a Hollywood producer or executive?

Ask yourself why they no longer have that job. No one gives up one of those jobs to scrape a living out of writing coverage or “coaching.” It’s a grind, the pay ceiling is low, and it’s nowhere near as enjoyable as actually making stuff. These are people who lost their jobs and eventually couldn’t get another one. What’s important is asking them what their metrics for success are for their clients. Usually you’ll get an answer like, “I took a writer from being pretty rough to being a semi-finalist in the Eastern Idaho Screenwriters Jam.” See above for why that’s not exactly a success worth paying for. Remember, if you’re seeing 250+ scripts a year for over 20 years, the odds are some of them will win some prizes and some of them will get optioned. It’s the same way Robert McKee does his…thing…on “Here’s all the famous Hollywood people who have benefited from my book/seminar!”

So who should I listen to?

First and foremost, people who have figured out how to do this for a living. There are several here giving you advice for free. Then other writers who are making concrete steps forward in their careers. Remember that time reading and commenting in a forum does not necessarily equate to either knowledge or experience. People chasing their own tails very much want company.

So, how in the hell do I ever break in?

You tell great stories that have a compelling reason to exist in film and/or television and you work every viable angle to create lasting relationships that can move you forward. It is very much a relationship business, but not in the sense that many people perceive it. Knowing someone powerful isn’t the thing. Knowing someone who has a credible and meaningful place on your path from “aspiring” to “working,” is what you want to focus on.

I’ve been thinking that there are probably four or five archetypes of entertainment industry relationships you need to foster to give you the best possibilities for success. Going to give it some more thought and post that later in the week if it ends up being anything sensible.

In any event, focusing on the sorts of relationships that can advance your career, even a little, in addition to constantly advancing your storytelling craft, are far more important than sweating contests and CUT TO:’s.

None of this is meant to be depressing or defeating. I want everyone to maximize the success their talent, craftsmanship, and good fortune can facilitate. My hope is that allows more time and focus on the things that genuinely move you forward rather than the things that keep you stuck in place and shotgunning out money better spent elsewhere.

Wishing you all a great week.