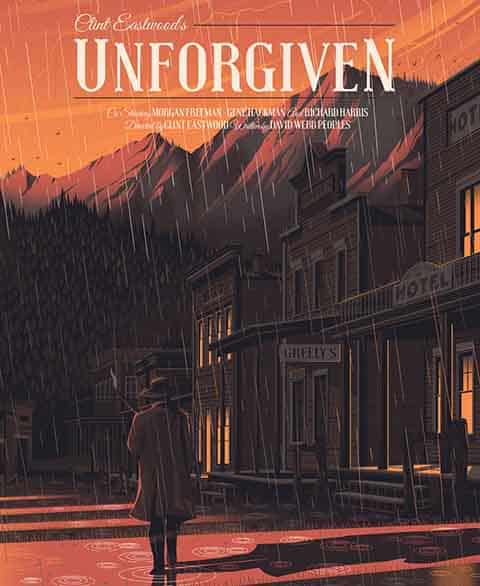 I was reading an article on Yahoo News about the making of Clint Eastwood’s western Unforgiven, a big Oscar winner from 1992. The script was written by David Peoples in the ‘70s. Eastwood optioned the script and sat on it until he felt he was old enough to play the character. Check out these paragraphs:

In shooting down myths, murder hangs heavily over Unforgiven. It’s a frivolous act in classic Western – the natural order of crime and punishment. But Unforgiven is a film about killers who no longer have the stomach for death: the sharpshooting rifleman, Ned, who can’t bring himself to trigger the kill-shot; blowhard gunslinger English Bob, who bottles it when he’s offered a free shot at the sheriff; and the Schofield Kid, who lies about killing five men, and is traumatized when he finally shoots a man for real.

“It’s a hell of a thing, killing a man,” says Will Munny. “You take away all he’s got and all he’s ever gonna have.”

[Screenwriter] David Peoples jokingly agrees: “Every time I kill a man, I always have trouble eating dinner afterwards…after I shoot a few people, I’m just ruined for the day!”

“Every time I kill a man, I always have trouble eating dinner afterwards…” Dayum, dude!

Oh, and by the way, Richard Harris, who played English Bob, recalled getting a phone call from Eastwood who asked him to be in this movie. “Uh-huh, sure,” he apparently thought. Harris initially believed someone was playing a practical joke.

You can find the entire article here.