It was yesterday, Sunday, August 19th, 2018. I received a text from a young man who said he needed a track for a recording session. I got his info and promptly forwarded it to Deborah Jane, our resident rapper-writer and song lyricist. It turns out the deadline was like immediately. Projects like that can be a huge challenge. You need to get the work done very quickly, deliver it to the client, and there literally little to no time to tinker with it. Fortunately, DJ is a musical genius. I asked her to write the story about this adventure, and it is below. If you need her expertise with your songwriting issues, just contact me and I will get it handled. Here we go:

For a songwriter, inspiration can strike at any moment. An assignment can too. As the resident hip-hop writer/rapper for Ghostwriters Central, I’ve always got to stay on my lyrical toes when one strikes. I was on my way to my girlfriend’s baby shower, preparing to spend a relaxing day by the pool in balmy sunshine, chatting about pre-natal care. While driving on the 405, I followed up on a potential client, totally expecting to get a confused runaround (typical of first-time clients). Instead, I encountered an 18-year-old rapper who was adamant on getting his song done for his album NOW. He said, “I’m going to the studio, can you get the song written by tonight?” I was stunned. Usually, I give myself at least a few days to swim in a song’s lyrical composition — but there would be no time to backstroke on this one. So, I said yes. 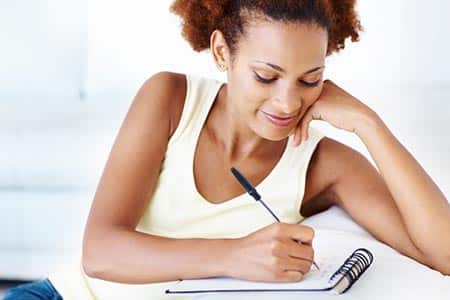 He gave me his basic criteria: Write a song about making money, getting girls, and driving nice cars. And he wanted it to sound like Lil Mosey, too. Spoken like a true teenager. Now, these are not topics I usually write or rap about — being a grown-ass woman in her 30s. Even as a rapper myself, I’m more on the Lauryn Hill tip than the  Lil’ Anybody “mumble rap” tip. But a great songwriter can get inside the head of anyone they are writing for. So here goes….

As guests partied at the baby shower, I asked my friend for a pen, some computer paper, and excused myself from the party. I walked to the pool by myself. I lifted my hands to heaven and started praying as I walked around the pool. I truly believe God is the author of all songs. So, I asked Him to give me the song (as materialistic as it might sound), and I opened myself to receive. As I sat out there, with pen and pad, the lyrics started to flow. Luckily, my client had given me a little insight into his hard-knock life growing up in the hood. To him, a nice car was not just a material position, but rather the symbol of status and success. A Nice Car meant Making It. Suddenly, I had  my motif.

Drawing on his life story, I wove a relatively light chorus about making it with cash, cars and girls, with a deeper verse about his struggle to be the Man of the House — when he  was only a teenager. This song was giving me “Juicy” vibes (Biggie, y’all). It really was all a dream.… I played with different rap styles and patterns, switching from staccato rap, to today’s more popular “sing-songy” rap (thanks, Drake). Meanwhile as I wrote, texts kept coming from my client: Is the song done yet?  Is the song done yet?  Is the song done yet?  Now, I knew how much recording studios cost, so I imagined him waiting anxiously by the mic. My gracious friend, even allowed me to stay at her house even though the baby shower was over. Pressure mounting, I buckled down, juggling lyrics, paperwork, and recording a version of myself rapping it in the bathroom. Finally, as the last guests filed out, I emailed him the song.

My client had to run the song by his management. So I have no idea how the recording session went. But the next morning, I was pleased to receive the text from my client reading, “Damn, that shit was fire!”   Hey, spoken like a true teenager.