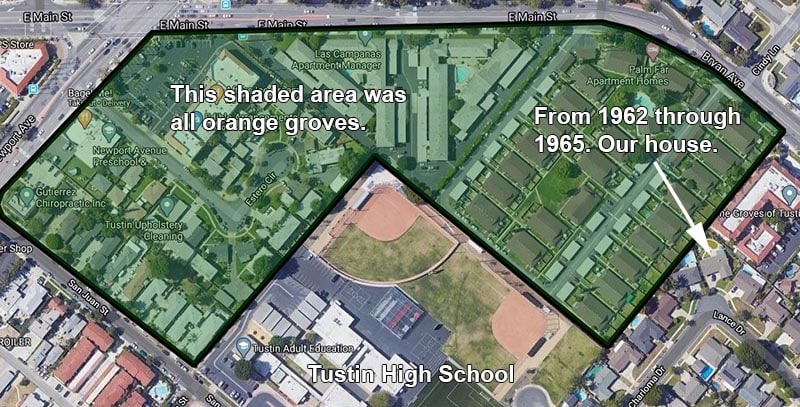 When was the first time you wrote something that absorbed you so completely that you lost track of time because you were super focused on the story you were writing?

For me, it was around 1963, as a junior, in a creative writing class at Tustin High School, in Tustin, CA. Our homework assignment was to tell a story. I opted to write about an orange fight. Let me explain.

Back in those days, before the developers snatched up nearly all agricultural property to turn into apartments, houses and commercial buildings, Tustin was relatively rural. It’s only some 15 minutes south of Disneyland in Orange County. My parents bought a house in a new subdivision called Tustin Terrace. Orange groves were everywhere, including over our back fence and around Tustin High School.

For recreation? Well, hot cars. My neighbor Jim had a badass ’64 Plymouth Belvedere. And drag racing on rural roads amid the groves near El Toro Marine Base; races were negotiated at Oscar’s Drive-In restaurant in Santa Ana. The other thing was combat in the groves, using oranges as weapons. That’s what I wrote about. A true story about two teams of teen boys roaming the groves, armed with oranges plucked from the trees. When the enemy was spotted, we opened fire. If you got splattered, you were out.

The high point was when we spotted a guy from the other side hiding up in a tree. We relentlessly splattered that sniper. I wonder what his mom thought when he got home.

I pounded away at the typewriter, oblivious to everything. Never before had I been so absorbed in writing a story. It’s quite an experience, being so thoroughly immersed in writing that nothing else exists. Until mom called you for dinner, that is. I aced the grade. I still have that paper, in a box somewhere.

That’s when I realized I’m a writer at heart.

And fortunately, the owner of the orange grove didn’t catch us.